The selected quantity can be changed at any time in your shopping cart.

Aircell 5 is a thin, flexible coaxial cable for the frequency range to 10 GHz.

Aircell 5 - Meter Goods cut from 10 m on. Free cutting according to your specifications.

The very low relative to the diameter attenuation and the usefulness of RG-58 standard connectors makes the cable for many applications in high frequency technology interesting and recommended. Attenuation at 2.4 GHz: 0,533dB / m The relatively low attenuation of Aircell 5 is achieved by a low-loss PE-Compound dielectric with a gas proportion of more than 70%. The material is also resistant to moisture. The single core inner conductor of Aircell 5 is pulled out of low-oxygen copper (OFC). To achieve a good shielding effectiveness of the outer conductor of AIRCELL5 is constructed in two layers: on a thin, overlapping copper foil a copper shield is applied with a coverage of 72%. The film is on the inside of PE-coated and thereby protected from cracking at too small bending radius. The black PVC outer sheath of Aircell 5 is UV stabilized. A big plus for Aircell5 is the availability of commercial Koaxverbindern: Aircell 5 has the same outside diameter as the well-known RG 58 coaxial cable. For this reason, almost all standard RG-58 coaxial connectors can be used for this cable. Aircell 5 is a modern coaxial cable for many applications in communications technology: it is flexible, low loss and stray radiation. 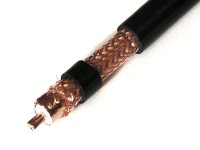 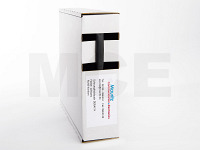 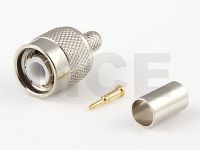